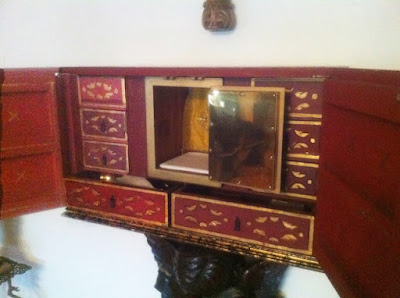 “Something strange is happening -‐there is a great silence on earth today, a great silence and stillness. The whole earth keeps silence because the King is asleep. The earth trembled and is still because God has fallen asleep in the flesh and he has raised up all who have slept ever since the world began. God has died in the flesh and hell trembles with fear.” [from an ancient Holy Saturday homily]
Tenebrae: A Service of Shadows. The service of Tenebrae, meaning “darkness” or “shadows,” has been practiced by the church since medieval times. “When therefore Judas had received the morsel, he went out quickly. And it was night.” [John 13,30] “Jesus said to the chief priests and captains of the temple who had come against him: This is your hour, and the power of darkness.” [Luke 22, 53] 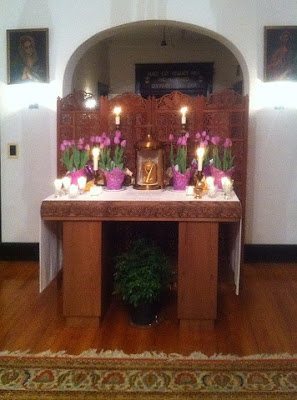 The altar of Repose was created by Fr. Sam Morello, our liturgist at Marylake. Father Raphael celebrated with Mass on Holy Thursday with Frs. Sam and John Michael. He spoke about the Little Flower, our provincial patroness. Luke Johnson’s girls rang the bells for the Gloria, and Gilbert Johnson read the epistle and sang the responsorial psalm. After the liturgy we processed to the Garden of Gethsemani represented by the tulip decorated altar in our monastery’s entrance hall.
A bit of explanation on how Raphael worked Therese’s dying into the Holy Thursday liturgy. In the gospel St John recalls that Jesus “loved his own in the world and he loved them to the end.” [Jn 13,1] Amid all her sufferings when she could not even breathe from tuberculosis, Therese saw herself as the un- petaled rose, content to love Jesus to the end. 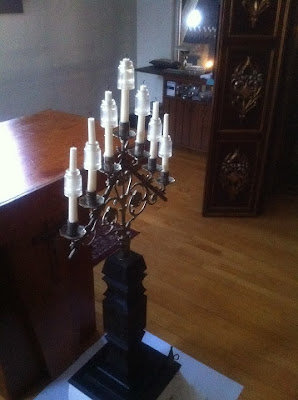 On the three mornings of the Holy Week Triduum, the community gathered in our upstairs chapel to celebrate the Tenebrae, pausing after each psalm of the Office of Readings and Morning Prayer to extinguish a candle. 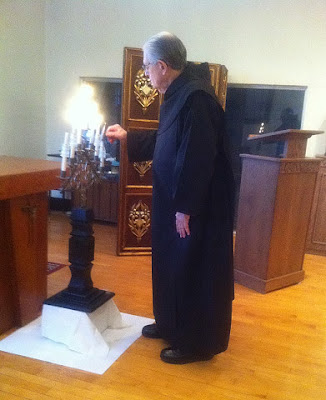 Father Sam celebrated the Good Friday liturgy at 3:00 pm. Gilbert Johnson, a longme friend of the community, narrated the Passion with Walter Stephens, Gilbert’s brother‐in‐law, taking the part of the minor characters. We all ended up shoung (much to our chagrin, “Crucify him! Crucify him!” Father John Michael was principle celebrant for the Easter vigil with Fr. Sam celebrang as deacon and singing the beginning of the Easter song, the Exultet.
On the Easter vigil, Dennis Lee, chancellor of external affairs for the diocese of Little Rock, read the first. Scott Gallagher read the second, Luke Johnson read the 3rd, Sam Muehlebach read the 4th, Theresa Wrape Lee read the 5th, Rita Wrape read the 6th, and Gil Johnson read the 7th—all friends of Marylake who have traditionally attended the Easter Vigil at the monastery for many years now. Raphael read the epistle, and Sam the gospel. John Michael preached a short sermon.