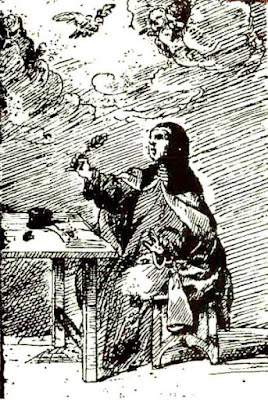 These are two of my favorite depictions of Teresa de Jesús. The first is from an 18th century woodcut. I found in on a holy card. I like it because it shows the saint in an activity typical of her. She’s writing at a simple desk, presumably in her cloistered monastic cell. Hovering over her quill pen is a dove representing the inspiring muse of the Holy Spirit. As St. Paul told the Corinthians, “No one can even call Jesus Lord without inspiration from the Holy Spirit.” So here we have Saint Teresa in a nutshell: she was a woman in love with Jesus. She received from Him what she wrote to others. An almost hidden feature of this woodcut are a couple of angels up in the clouds urging Teresa on with her writing, encouraging her. They say that writers are writers because they love to write. This was not true for Teresa. She hated to write.
One scholar said her entire life was one continuous “Gracias.” He based this mostly on all the letters she wrote to thank people for their donations to the convent. We have at last count 468 letters. That’s only we ones that have been preserved since the 16th century. John of the Cross tore up all the letters she wrote to him. Others disposed of their letters from her for fear the Inquisition might find an error in what she wrote. For love of Teresa, they burned her letters. “Writing prevents me from spinning; this is a poor house with many things to be done." [Life 10,7] The nuns sewed from the spinning wheel. That’s how they helped pay the bills. Teresa thought she was stealing time by writing; time that could be used for more worthwhile activities. But still she wrote. She did it out of obedience to the priests to asked her to write about her relationship to Jesus, and she did it out of charity toward the community. After all someone had to thank the benefactors. So there you have Teresa: a writer determined to do something she didn’t like doing because she was a woman of obedience and charity. She was free because she made herself the servant of all that she might gain more lovers for Jesus. [cf. I Cor 9,19] 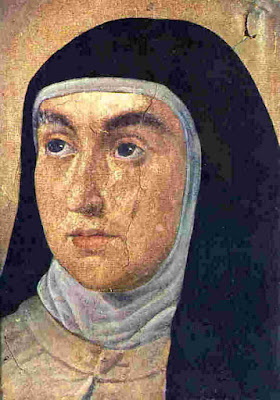 The second image I love is this colorful portrait of her face. The 17th century painter is unknown. It was given to the Real Academia de la Lengua of Madrid by the Ahumada family. That’s Teresa’s family name. They were the Ahumadas and the Cepedas. They were migrants from Toledo. We suspect the reason the family fled the royal city for the hills of Castile was that her Cepeda grandfather was humiliated because he was a Jew. Jewish blood was discovered in the family. That would have been a shameful thing for the Spanish upper class, and no one in Teresa’s family ever talked about their Jewish background.
Teresa was a colorful woman. That’s why I like this painting so much. She failed to blend in with the expectations of her time. She could read and write. She could do more than sew and cook. “Just being a woman is enough to have my wings fall off," Teresa lamented. [Life 10,8] She overcame the limitations imposed by her culture. She was a determined woman. She chided her Sisters lest they complain about their vow of celibacy, by telling them how free they were from being controlled by a husband.