Late May in Marylake

It was one of those beautiful spring days this year as we celebrated the feast of Corpus Christi. Fathers Provincial and Ralph had come to visit on Friday in preparation for Sister Lucia’s jubilee Mass Saturday afternoon. It was her silver jubilee of profession, and their chaplain, Fr. Lawrence Fredrick’s golden jubilee as a priest. Our community at Marylake attended. The next day on Sunday morning, I concelebrated our Corpus Christi liturgy with the Provincial and Ralph at an early hour so they could hit the road to St. Louis by 8 O’Clock. I made them breakfast after Mass which delayed their departure by 10 or 15 minutes.

Spent the rest of the morning just enjoying the beautiful spring day. Everything was so calm and peaceful. What is that saying? “It’s always calm before the storm.” During siesta my i-phone’s weather app started buzzing, but I ignored it twice because it likes to interrupt my sleep by telling me it will start to rain in 15 minutes. No big deal. Except this time it was a big deal. By the time I got up from siesta, a major storm was in full force barreling down on us. Apparently Marylake was targeted for a circular swirl of congregating fronts coming in from two opposing directions. Jerome and I looked out the scullery door and saw sheets of rain coming in from the east; then coming in from the west. Jerome later found puddles of water on the floor of the chapel where the sheets of rain had come in from the north. Then we looked out the kitchen window to see a huge tree down on the road right where Father Provincial had his Toyota parked just hours before. 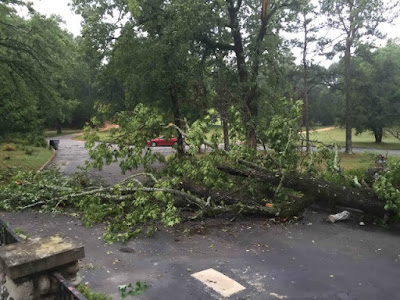 He got out just in time. Raphael then came to tell us another tree had fallen blocking the road to our carport. 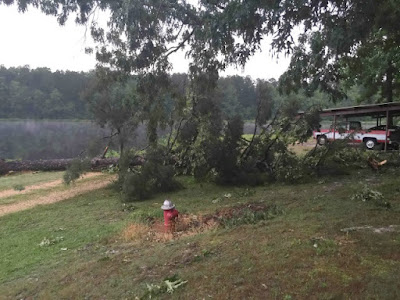 Seven or eight years ago, a novice removed a statue of the Sacred Heart of Jesus from a garden area on the east side of the monastery, and carried it to the bellstone in our circular driveway. Without any permission to do so, he used the historic millstone under our outside bell as a pedestal for that statue. 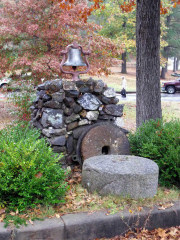 Although it was a nice enough statue, its placement on top of that millstone had always irked me. And the only reason I never moved it was that it was a very heavy statue, more easily moved by a strong young novice than by an weak-backed old friar like me. Well God kind of answered my prayers when He took down that tree in back of the bellstone. 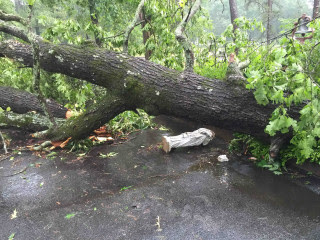 Not only was the Sacred Heart knocked off its pedestal, but was decapitated in the process. 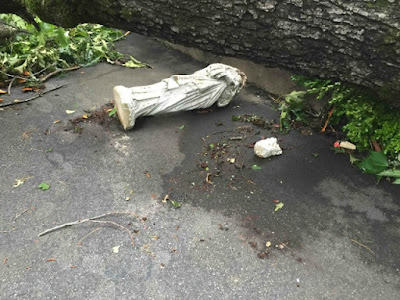 No one knew where our dog Basil sheltered out this major storm. We found him after it was over sitting on the felled tree under the bell, as if he had something to do with the fall of this mighty oak. 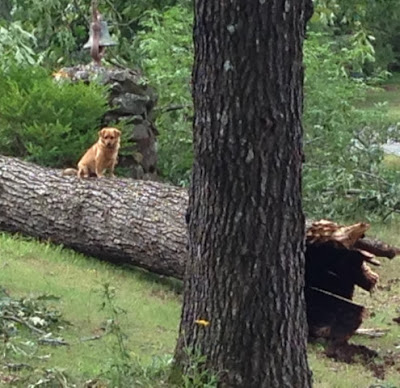 I claim a purple heart for clean-up efforts as I stumbled over a flooded curb and lost my big toenail. 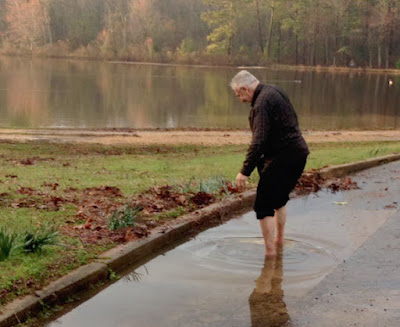 Asked by the community if the loss of that toenail hurt, I thought back on the experience and realized the loss of my dignity splashing down on the mud soaked ground was what hurt the most.