Now we begin the Sacred Triduum.  "This day shall be a memorial feast for you . . . Ese día será para ustedes un memorial y lo celebrarán como fiesta en honor del Señor . . . which all your generations shall celebrate with pilgrimage to the Lord, as a perpetual institution." [from the First reading of Holy Thursday] 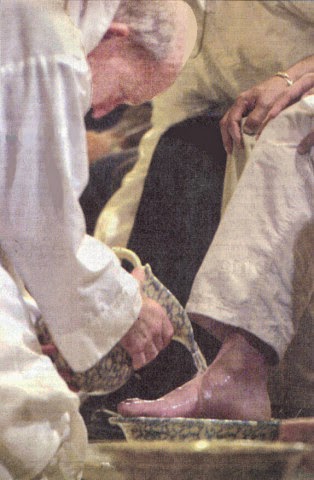 It begins Thursday evening with the celebration of the Lord's Last Supper.  Mass on Holy Thursday proceeds pretty much as usual until after the sermon or homily, the celebrant divests in order to wash the feet of those attending.  "Before the feast of Passover Jesus realized that the hour had come for him to pass from this world . . . fully aware that he had come from God and was going to God the Father, who had handed everything over to him . . . Jesús, consciente de que el Padre había puesto en sus manos todas las cosas y sabiendo que había sdalido de Dios y a Dios volvía . . . Jesus rose from the meal and took off his cloak . . . se levantó de la mesa, se quitó el mento . . . He picked up a towel and tied it around himself . . . y tomando una toalla, se la ciñó . . . Then he poured water into a basin and began to wash his disciples' feet and dry them with the towel he had around him." [from the Gospel of Holy Thursday]

In our Hispanic parishes, twelve of the youth are dressed in apostolic robes as they come forward to have their feet washed.  At Marylake, it has always been "a tough sell" to find more than three or four willing to take off their shoes for the foot washing.  One duty of the sacristan is to see to it that the water is warm so the willing volunteer doesn't flinch as the priest pours it on his foot.

From a homily:
This evening we return to capture a bit of the flavor of that original last meal Jesus shared with his chosen Twelve.  For Jesus it was a time of deep feelings, a night of profound emotion.  He had chosen these twelve men very carefully, and after much prayer.  They had been his companions through the good times and bad.  They were the ones to whom he had opened his heart.  It was to them that he revealed his innermost thoughts.
This evening's meal is tinged with sadness.  It is a time of transition.  The nature of the celebration itself was a rite of passage, as Jesus recalled how his people passed over from a familiar land to an unknown one.  It was a relaxing evening for the twelve friends of Jesus.  Jesus made sure his own preoccupations did not interfere with the mood of the celebration.  The small group reclined after the meal and John rested his head upon Jesus.  Peter had drunk too much, and James and John as well.
This will be shown by their hasty words, abrupt behavior, and slow reactions later on that night.  But for the present, there were no words of reprimand, no tensions raised to spoil the mood.
There was a poignancy in the air, however, as Jesus took off his festive cloak, stripped down as a waiter, and began to wash the feet of those whom he loved.  Jesus ministered to them who came to minister to him.  You must wash each other's feet... as I have washed yours.  Intimacy with Jesus entails serving his servants.
Jesus knew this was the time of his passing.  He was preoccupied with poignant thoughts of one friend who would deny him, of another who would betray him, of three who would fall asleep at the moment when he needed their support the most.  There would be blood.

Then comes Good Friday, the one day of the liturgical year when we do not celebrate Mass.  The story is told in Dallas of one of our friars who scheduled a wedding for Good Friday, forgot about it, and took the altar servers on a picnic in the park as the bride and groom waited for a priest to show up.  Most of our Good Friday liturgies begin in the afternoon from noon to three.  "Now it was nine when they crucified him."[Mk 15, 25]  "And when noon came there was darkness over the whole land until three.  And at three Jesus cried out with a loud voice, ‘My God my God, why have you forsaken me?’” [Mk 15, 33-34] 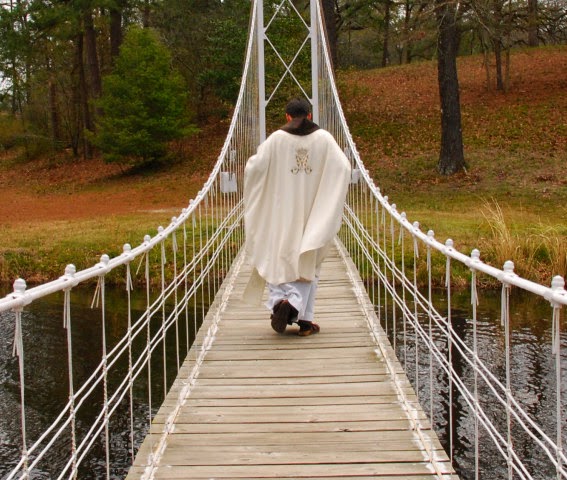