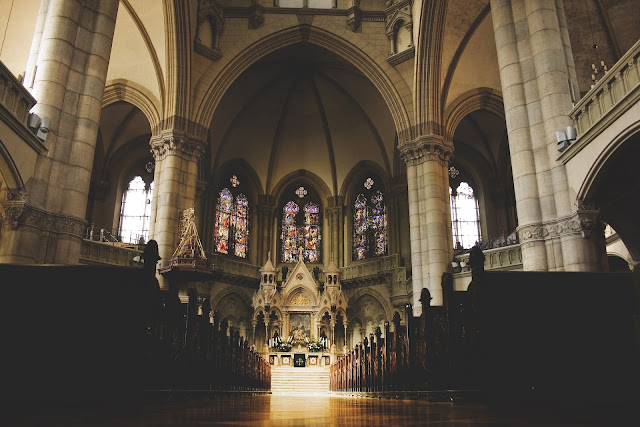 The narthex, the nave, the steeple,
the transept, the columns, the corbel,
the buttress, the portal, the plaster,
the gold, the marble, the silver.

The Stations of the Cross
carved in Paris and shipped
in the hold of a schooner
on its way to Boston.

The bond stone, the bed joints, the mortar,
the granite, the weep holes, the stretcher.

The Irish mason who ate
his lunch sitting on scaffolding,
legs dangling in the air
200 feet above the ground.

The bull’s eye, the rondel, the solder,
the leading, the fish tape, the badger.

The stained glass designed
in Germany by a man whose
apprentice was engaged
to his oldest daughter.

The birdsmouth, the cheek cut, the gable,
the stringer, the molding, the spandrel.

The carpenter who kept
a holy card of St. Stanisław
in his pocket, given to him
by his mother in Krakow.

The arches, the ambo, the pillars,
the chancel, the pew rows, the altar.

My heart and knees joined
to those who lived long ago,
whose hands forged
this sacramental frame

in which I kneel; the mysteries
of their craft caressing
the mysteries of God;
calling the faithful to prayer.