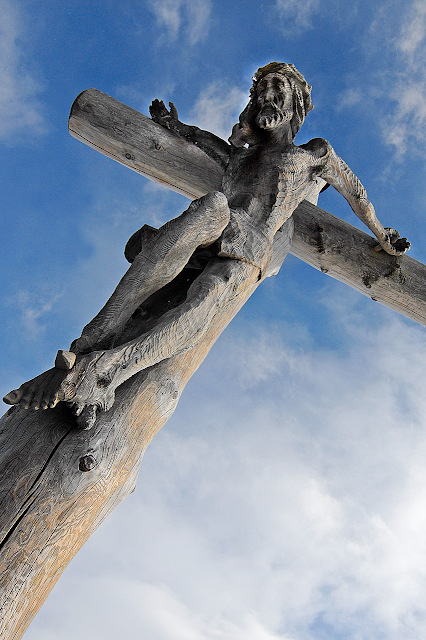 IV.
Good Friday
His journey into the final end of it began in earnest
When his voice first choked, spitting out a salty red brine.
They had fed it to him like thick soup, ladling it up
From deep inside his body.  In his stomach,
His throat, his mouth, all the way up,
It had burned like tears.  "Death will free me of it,"
He'd hoped.  "Then this moment of dying will have become
One with my flesh."  Breath soon failed him.
It clotted in his chest as if it were a clenched fist,
Or a flower opening and closing, quickly, repeatedly,
Till it seemed he was panting hard, his lungs assembling
A final cry that, like fast moving thunderclouds,
Would flee from him and be gone, wandering homeless
Like an unclean spirit out beyond the treeless plain,
There a bodiless roar.  Soon it felt as if his limbs
Had been wrenched from their center.
No longer could he fit into his feet, while his hands
Were fixed in a mass of thick, entangling lines.
He rose and fell, a marionette pulled along by the wide
And very graceful movements that this final act of his dying
Had mastered in him.  Slumping over, jerking awake,
He felt buoyed by the gentle waves that swept round him
Like weariness, his body trailing after a step or two, distracted
By the last rays of the fading light.  "God will take care