Conjuring Up the Eternal – Part 5 of 7 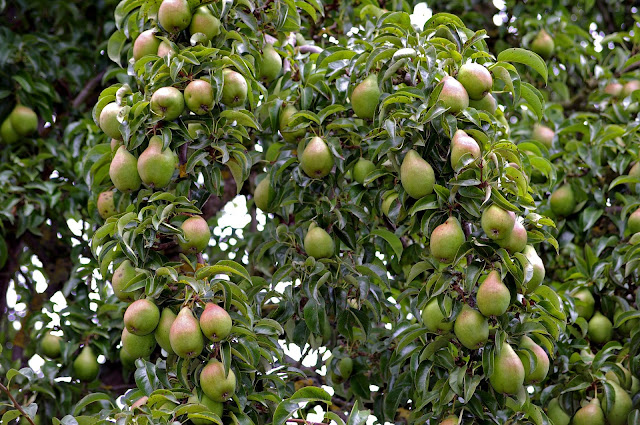 There's no sweetness these fruity molecules,
Packed tight as clay and strung like lights from
The graceful, arching branches of these trees,
There's nothing they will not undertake for you,
Filling your belly with the nectar of a ripe plum,
Or stuffing your satchel with choice pears, shaped
Like teardrops and tasting of a plenary indulgence
From purgatory's cleansing bubblebath of fire.
*
And then, each night as you sleep,
No far-flung vision, no oracle of wisdom,
Is denied you.  You're growing older
Each day, yet you know deep down, beneath
The soul's unbroken silence, that this weight
Of flesh enfolding you will become
Someday, inwardly, as invigorating as
That first thin thread of water let loose
By spring's long-awaited thaw; while,
Outwardly, it will shine as sharp and lucid
As a bed of irises popping into bloom.
*
It is then that he will appear to you, he who
Had appeared often before, though mostly
In unrecognizable guises, but who now
Has become the very exemplar of that life
You knew, again deep down, had been
Promised you.  He will step forth from hiding
To gaze with amazement on the likes of you,
Indeed, on the likes of everyone.  Here is
The birth he once enjoyed in a stable
Multiplied innumerably and become
A vast choir; and here is the grace

And energy he once freely imbibed, and
Happily called Abba, now spread out over
Land and sea, exceeding in extent even
The empire of Genghis Khan.  Yet it rests
Peacefully, impartially, lying everywhere
Like sunlight on grass, or seed freely sown.
Yes, he had once dreamt it would be this way,
Where all will finally have become themselves,
Singly and together.  "Behold, friend," he says,
"See how very wondrous and radiant it is."
***
Very simply, this poem enacts what the title suggests.  Grace emerges from nature.  The fulfillment or perfection of all things is accomplished wondrously by God.  (By the way, the he in the third section is, of course, Jesus, although you knew that.  It's obvious.)
Jesus gave us parables to help us imagine God's Kingdom.  Here are a bunch of other images, from my own imagination.  For example, on that day our bodies "will shine as sharp and lucid / As a bed of irises popping into bloom."  Which of the images offered by this poem perhaps touches or speaks to you most?  Do you have an image of your own to suggest?
Written by Fr. Bonaventure Sauer, OCD
| Carmelite spirituality, contemplative spirit, God's Kingdom, grace, imagery, Jesus Christ, nature, poetry, promise, rebirth
Comments
See Older Posts...
Other Pages
News
Prayer
Blog Central
Donate
Contact Us
Location
Sitemap
Privacy and Cookie Policy