Welcome to the Provincial Blog.

Here, we feature posts by our Friars and by other contributors from the Carmelite family. Our goal is to provide you with content relevant to Carmelite spirituality and life in the Province of St. Therese. 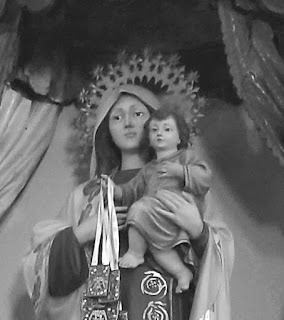 As we continue to honor Mary in this month of May I would like share a few words on Marian apparitions or visions[1], a topic I mentioned in my last reflection. I had explained how the relationship of us Carmelites to Our Lady is founded on Sacred Scripture and the Church's teachings more than on these extraordinary phenomena. In this we attempt to live a life similar to hers, which was led by the light of faith in the ordinary more than spectacular spiritual events.

It is important for all Catholics to understand what the Church truly teaches about Marian visions so as to keep a balanced approach to them. When the Church grants her approval it means that the faithful are free to believe in it if they so choose, but they are not obligated to. This is so because these events, when genuine, do not add anything to what the Church already teaches about Our Lady or any other aspect of the faith. Real Marian visions are only a reminder of what God has already revealed to us; through them he seeks to encourage us to live by it. That is why those who choose not to believe in them are not deprived of what they need to fully live out their Catholic faith and their call to holiness. That being so, when choosing to believe in approved Marian visions, we need to keep in mind that these are meant to be a help to our faith more than its foundation. After all our Catholic faith is built on the Word of God (fully revealed in Jesus Christ) that comes to us through the Church in Holy Scripture and Sacred Tradition.

Some important questions we should ask ourselves when we follow approved Marian visions are: "Are they helping me to grow in the virtues of faith, hope and charity? Are they grounding me more in the Church's teachings? Are these phenomena motivating me to persevere in my life of prayer and in my love and obedience to the Church?"

On the other hand, all this being said does not mean that we Carmelites reject approved Marian visions. I myself have been to pilgrimages to the shrines of Our Lady of Lourdes, Our Lady of Fatima and Our Lady of Guadalupe. All of them, especially the last one, have been places of grace for me.

Having a balanced approach to Marian visions also includes avoiding falling into the opposite extreme, which is to look down on them and on the people who follow them appropriately. It is okay if Marian visions do not do much for our spiritual life as long as we are respectful of others and of the different ways that God chooses to draw them to himself. Just because the way our Lord brings someone closer to him is not the one we think best or is not the one I follow, doesn't mean it's not a valid route. God usually meets us where we are and then attracts us to where he wants us to be. For example, what moved our Holy Mother Saint Teresa to enter the convent of the Incarnation was not the most perfect of motives. It was not mainly a profound love for Our Lord and a deep desire to serve others, but the fear of hell.[2] Nevertheless God used this to gradually bring her to an ever deeper love relationship with him and to eventually make her a great Saint. This being the case, who then are we to judge and dismiss God's work in the lives of others?

Seeing others who follow approved Marian visions as spiritually inferior is a danger that could be worse than exaggerating the importance of these phenomena because it stems from one of the worst sins, spiritual arrogance. Let us keep in mind that during his public ministry Our Lord was able to touch the hearts and bring to conversion many great and public sinners. The ones he was unable to bring to conversion were those who were spiritually arrogant, those who thought of themselves as holier and above the rest, like the Pharisees. We need, then, to be careful not to fall into assuming that people who follow approved Marian visions are spiritually inferior, overly pious and ignorant of real theology and Sacred Scripture.

We priests need to be particularly careful in this matter so as not to hurt the flock that we have been called to lead. In imitation of Christ himself we are to meet them where they are and with compassion and humility minister to them discerning and following the lead of the Holy Spirit in their lives.

God gave us the invaluable gift of the Church to guide us in our journey, in this case to have a balanced approach to phenomena such as Marian visions, and so avoid erring on either side of the issue.

If we truly love Our Lady we are to strive to imitate her virtues, especially her humility, obedience, and her fraternal charity. This applies to all of us Carmelites and non-Carmelites, whether we follow Marian visions or not. I conclude echoing here some wise words from St. Augustine that summarize well the message of this reflection: "In essentials, unity. In non-essentials, liberty. In all things, charity.”

[1] The term visions is more theologically accurate than apparitions, since when they happen it doesn't mean that Our Lady makes herself physically present. If that was the case everyone present would see her, not just the visionaries. This, however, doesn't make them a less genuine and God-given spiritual experience.
[2] St. Teresa of Avila, The Book of Her Life, 3: 5.